Is Your Business Hurricane-Ready? 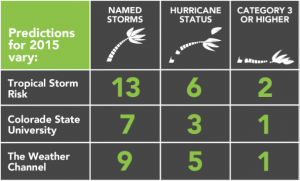 June 1 marks the beginning of the 2015 Hurricane Season. According to Tropical Storm Risk there will be 13 named storms this season, with six reaching hurricane status. This clearly puts the odds in Mother Nature’s favor, not yours.

Each year the World Meteorological Organization pre-names the upcoming season’s storms. In fact, there is one list of names that is repeated every 7th year. Names are only retired if a storm is so catastrophic that it’s deemed inappropriate to use it again. The most recent retired names are Ingrid (2013), Sandy (2012), and Irene (2011).

And don’t be fooled by the sweet sounding names. The first storm of the season, Ana, actually means “gracious”. There is nothing gracious about a tropical storm. According to The Weather Channel, Ana is the second earliest land falling tropical storm on record in the Atlantic. Not a good way to start the season.

The better prepared a business is to ensure their critical business assets are protected, the better they will fare post storm. In planning, it’s key to leverage a solution that offers a hybrid cloud-based model, so you can recover your data and systems from either an on-site appliance or the cloud.

Check out Datto’s new infographic for all things Hurricane.